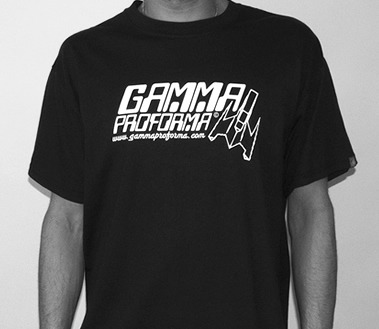 London has been home to many legendary labels: MoWax, Ninja Tune and Warp just to name a few. But apart from the heavy hitters many small independent labels keep pushing the envelope too. One of these labels is Gamma Proforma. Mixing art, design and music Gamma Proforma can be seen as a continuation of labels like MoWax where the design of the record sleeve is as important as the beats pressed on wax. With their 15th anniversary last year it’s about time to catch up with Rob Swain, creative director and label owner of Gamma Proforma, to shed a little light on the story so far.

Hi Rob! Happy 15th anniversary! Tell me a little about yourself and the birth of the label.

Things evolved from a group of artists and musicians (wasters), originally in Edinburgh where I lived at the time. There was never much of a master plan, we made music, art, ran events, it made sense to give it a difficult to say name and develop it. I’m an annoying, opinionated bloke who has ideas above his station.

You are the curator of the Gamma output: Picking artists, releasing albums and designing the art books. How do you manage to wear so many hats at the same time? I guess you are not getting a lot of sleep…

As with all things you enjoy, it’s never really work. Projects develop at their own pace, there are always a lot of creative hands in the mix. It’s not like we’re rushing around, pushing all the time. It happens in a more laid back, bit by bit way. Deadlines come and go, but we always get there in the end. I guess the learning curve was pretty steep or did you have previous publishing experience before launching the label?

I’d previously ran a label, been in bands and had a shop, when Gamma kicked off it was more about doing things right, based on all the things i’d previously done wrong.

Gamma Proforma is quite a strange name, can you explain a little the meaning behind it?

Gamma represents 3 (Third letter in Greek Alphabet), it’s the 3 elements of what we do, Art, Music & Design. Proforma is a word i’ve always liked, it means ‘for forms sake’, in a working relationship, about being upfront and direct, the wordplay on ‘forms sake’ also appealed to me. It was 2000, that was the only domain name we could get.

The artist roster of the label is pretty impressive: You work together with some of the biggest names of the urban art scene like Will Barras, sheOne, Phil Ashcroft, Delta etc. How do you approach artists you like to work with?

A lot of the time we’ve met and discussed an idea, you meet one artist, then another. Most of the work happens in the pub, now and then if there’s someone who’s a good fit for a project or who has done something that’s impressed me, i’ll do what anyone would do, drop them a message or give them a call, send them some expensive biscuits. Let’s talk Rammellzee: You dedicated a whole art project to him and curated an exhibition at Magda Danysz gallery in London. What does Rammellzee mean to you?

There aren’t many people from hip-hop’s inception who achieved what Rammellzee achieved in his short life, he was a legendary MC, inspiring the likes of the Beastie Boys. His art was ahead of it’s time, like Futura he moved beyond letter-forms before most of the world even knew what writing (graffiti) was. He created a complex world of characters and mythology, building costumes and sculptures from garbage, all backed up by a movement on his theories on control through written language, Gothic Futurism.

Can you name anyone who’s even achieved half of that? He’s Hip Hop’s Sun Ra, a cult figure who’s influence has yet to be fully realised. You had Futura contributing a canvas for the Rammellzee show that was used for one of the 12″ releases as well. That must have been pretty special regarding his legendary status! Can you talk a little bit more about how that collaboration came about?

The Rammellzee project, Cosmic Flush, was about celebrating the life of a legend. When you’re talking Rammellzee, you can’t throw many names alongside his. Futura was a contemporary and friend of Ramm’s, he dubbed Futura ‘The Master Mapper’. It was fitting to have him involved, he’s part of the same story. Ian Kuali’i, who worked tirelessly alongside me on the project hooked up with Futura and made it happen, he was a gent throughout. You are coming from a Graphic Design background, can you tell me a little bit about your sources of inspiration? Futurism seems to play quite a big role…

I’ve been into Design since I was a kid, the only thing I ever liked about Star Wars was the design, the story is generally rubbish. My thing, for the most part is modern art, Futurism is a fairly loose term. It’s constantly evolving, as we can never really live in the future, it’s always just ahead of us, and as such, each generations view of it is different.

As a child of the 70’s/80’s i’ll always be drawn to the Futuristic vision of my youth, the Delorean DMC 12 was built in the city i grew up in, vector graphics were new, computers were in their infancy.

I draw a lot on the period from my formative years, as it was a time when the tools were just getting exciting, but you really needed to be creative to achieve anything with them as they were still quite limited in what they could achieve. I subscribe to the ‘less is more’ philosophy, it’s healthy to be restricted, you’re forced to approach things differently.

For the Rewire project you had electronic artists like Cristian Vogel, Divine Styler, Luke Vibert and Andrea Parker contribute music… was it hard to get them all onboard?

I worked on that with Andrea Parker, Vogel and Vibert came from her relationships. Divine Styler is a solid member of the Gamma team, he embodies a lot of what we’re about. On the project in general, if you have a good idea and treat people with respect, in most cases they are happy to be involved. I have no desire to persuade people to do things they have no interest in, it’s worthless unless they actually want to be a part of it. Running such a varied operation like GP must involve a lot of paperwork as well. With so many different artists involved, is it hard to sort out all royalties and rights and legal stuff?

Not really, most of the music we promote is available for free, we have very little paperwork, if a contract is required it’s usually very simple. We aren’t interested in tying people down or enforcing restrictions, for the most part, that’s what contracts do. A lot of the time we just shake hands and get to work.

With Banksy being at an all time high hype-wise and people like RnB singer Chris Brown trying his hand at street art, how do you feel about the urban art scene at the moment?

I don’t really pay any attention, I don’t even know who one of those guys is. It’s interesting how these generic labels bundle people together, I get why they are necessary, humans need labels to describe things, but just saying Urban Art or Street Art doesn’t really say much other than, someone painted something in the city, or here’s where the cool kids hang out. I’m not actually interested in these groups across the board, it’s like saying I like ‘Canvas Art’, I’m interested in art and artists, great painters, people of vision.

Getting back to your question, at present we live in a very noisy world, in the 90’s you’d be hard pushed to meet anyone who called themselves an ‘artist’, these days I hear it daily. It’s like the Xmas pressie went from guitars to turntables to paint, in some respects it’s great that so many people are pushing their creativity, a lot are just having fun, i’d say 5% have something to say. Gamma isn’t part of the scene, we get lumped in as a generalisation in the same way people throw independent record labels in the same pot.

GP pushes a lot of experimental music. Any artists not on GP you are currently excited about?

I find it quite difficult to find new music these days, I spent a few hours going through new releases on Bleep the other day, nothing jumped out. ‘Current’ artists that I have playing in the office today are Bad Bad Not Good, Dead Rider, Juice Aleem, Mr Len, Beak, Clint Mansell…

You are releasing a book about the legendary UK designer and artist Swifty soon. How did this come about?

After a few beers, a lot of the time it’s a case of ‘why has this not happened already?’ There’s no denying Swifty’s credentials as a leading figure in Graphic Design, his record sleeves alone could fill two books. It’s a real honour to be working with him, people like Gilles Peterson and James Lavelle owe him a lot, I personally bought their early records because of Swifty’s sleeve art, it was a seal of approval. Vinyl is back with a vengeance but smaller labels complain about big labels blocking the pressing plants with their mainstream releases. Did you guys have an issues with that? What are your thoughts?

What you say is true, there’s a rich fat bloke with a big arse and he’s hogging all the room with his RSD fodder. Until he fucks off we’ll all have to just wait in line.

You did what many designers dream of: Run your own show. Any advice for any striving art entrepreneurs?

Have a back up plan or side job. I’ve been doing this for over 15 years, financial security is not on the horizon. If you’re the sort of person who strikes out on your own or makes things happen you don’t need advice, you’ll do it no matter what people tell you. It’s like design, you can’t really teach it, it’s who you are.

Any final shout outs and announcements?

A massive shout out to you Solaris, and the other 12 guys that buy our stuff!

Thanks to DJ Food for addtional images: http://www.djfood.org/